پرش به محتوای اصلی
پرش به محتوای ثانویه
To the Youth in Europe and North America
۲۱/۰۱/۲۰۱۵ #letter4u
twitter.com/khamenei_ir
fb.com/www.Khamenei.ir
In the name of God, the Beneficent the Merciful
To the Youth in Europe and North America,
The recent events in France and similar ones in some other Western countries have convinced me to directly talk to you about them. I am addressing you, [the youth], not because I overlook your parents, rather it is because the future of your nations and countries will be in your hands; and also I find that the sense of quest for truth is more vigorous and attentive in your hearts.
I don’t address your politicians and statesmen either in this writing because I believe that they have consciously separated the route of politics from the path of righteousness and truth. 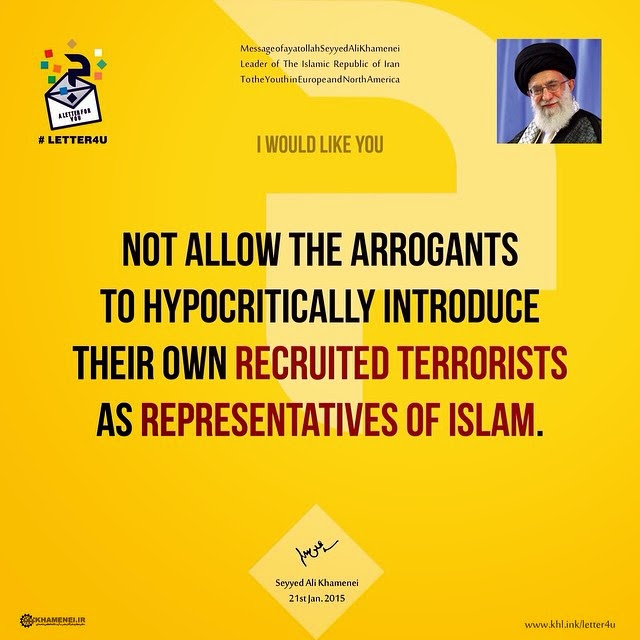 I would like to talk to you about Islam, particularly the image that is presented to you as Islam. Many attempts have been made over the past two decades, almost since the disintegration of the Soviet Union, to place this great religion in the seat of a horrifying enemy. The provocation of a feeling of horror and hatred and its utilization has unfortunately a long record in the political history of the West.
Here, I don’t want to deal with the different phobias with which the Western nations have thus far been indoctrinated. A cursory review of recent critical studies of history would bring home to you the fact that the Western governments’ insincere and hypocritical treatment of other nations and cultures has been censured in new historiographies.